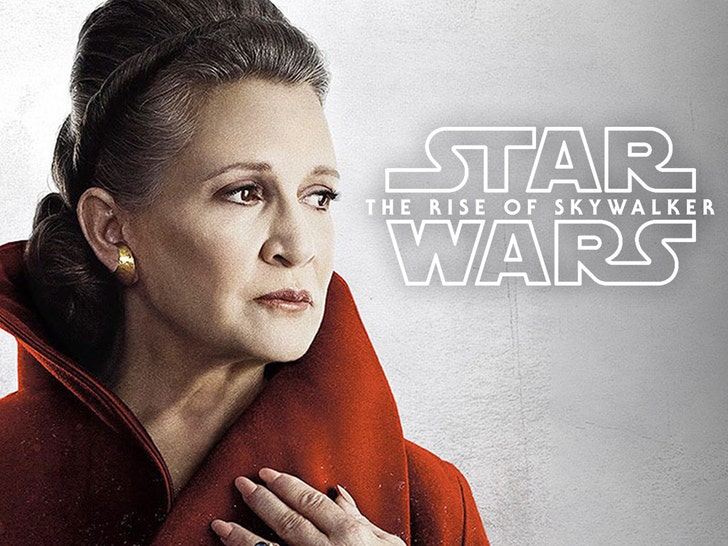 Carrie Fisher is showing up in the new ‘Star Wars’ movie in the flesh — sans any digital magic — but her fam says they would’ve signed off on a CGI Princess Leia … if it was needed.

The late actress’s brother, Todd Fisher, tells TMZ … while director J.J. Abrams and co. told them ahead of time they’d be using old footage of Carrie for Leia’s final appearance in ‘Rise of Skywalker,’ he says he wouldn’t have minded a computer-generated recreation.

Even crazier … Todd tells us he doesn’t think his sister would’ve cared about a CGI rendering either. If anything, he believes she would’ve given her full blessing, so long as it facilitated the story, and honored the legacy of the character. Todd says, “[B]etter that than nothing.”

There’s more evidence Carrie would’ve been on board with a CGI version of herself because one already exists. Princess Leia’s young face was superimposed onto another actress in the prequel to ‘A New Hope’ in ‘Rogue One,’ which filmed before Carrie died in 2016.

At the time, it’s reported she was cool with the studio’s digital take … which lends credence to Todd’s speculation. Fortunately — or unfortunately — Carrie will appear in the new flick without a touch of CGI … which might’ve possibly changed the storyline completely.

Todd had previously said J.J. and the ‘Star Wars’ team were toying with the idea of Leia becoming a full-blown Jedi before losing the lead star. It’s presumed that specific plotline has either been tweaked or tossed entirely in light of Carrie’s death.

Anyway, the takeaway here is basically this … if J.J. wanted to run with that, Todd and the fam probably would’ve given the green light. Guess we’ll never know now … 🤷🏽‍♂️