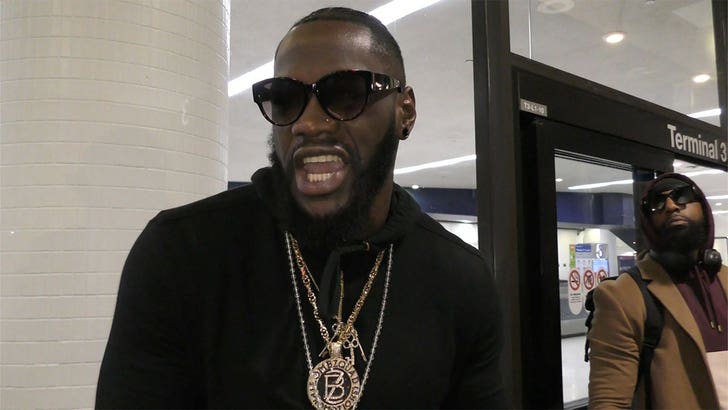 Deontay Wilder just WENT OFF on Anthony Joshua — saying he fought Andy Ruiz like a COWARD … and says AJ will get “demolished” if they ever get in the ring together.

“He didn’t want no engagement,” Wilder said about the Ruiz fight … “He was just scared.”

“You got a 6-inch height advantage, you got an 8-inch reach advantage. Why is you running from the smaller guy?”

Wilder says Joshua’s style was boring as hell — “Punch, hold and grab like you scared of confrontation!”

“When you’re dealing with Deontay Wilder … I woulda came in and demolished him!”

AJ has said his plan is to eventually fight Wilder to unite the heavyweight belts, but Deontay says AJ is full of crap … claiming Joshua wants absolutely NO SMOKE.

“He definitely don’t want me, for sure. I live in his dreams, I’m his worst nightmare.”

“A lot of people read into [Joshua’s] bulls**t and we can understand and identify and we know it’s bulls**t coming out of his mouth. We just don’t have enough toilet paper to wipe it as it comes.”

Bottom line … Wilder says he’s ready to destroy Joshua whenever AJ is willing to sign the contract — but he ain’t holding his breath.

In the meantime, Wilder is gearing up for his own rematch against Tyson Fury in what could be the best fight of 2020.