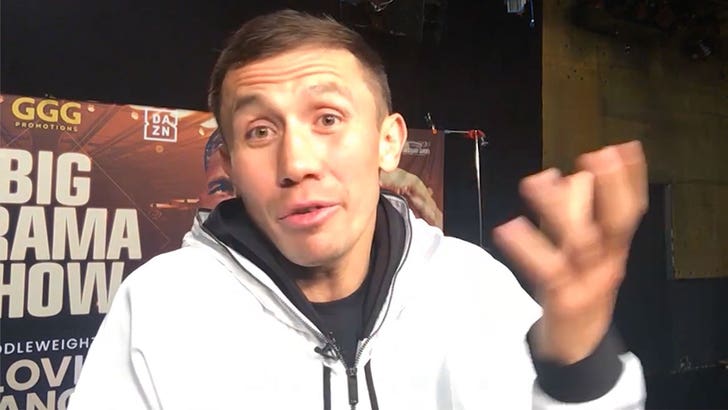 Gennady Golovkin says Canelo Alvarez should change his name to Amarillo Alvarez … because the dude is straight-up SCARED to fight him a 3rd time.

(Note for all of our non-Spanish speaking friends, “amarillo” means yellow.)

GGG is set to fight Sergiy Derevyanchenko on Saturday night at Madison Square Garden … but a lot of people are wondering why he’s not gearing up to complete the trilogy with Canelo instead.

So, we asked Gennady … and he essentially told us his team tried like hell to come to terms for a 3rd fight, but Canelo was ducking the smoke like he was Floyd Mayweather.

GGG knows EVERYONE wants to see the 3rd fight — and he was targeting a Sept. 14 matchup … but Canelo opted to go up in weight and fight Sergey Kovalev instead.

Golovkin says he’s getting sick and tired of talking about Canelo — you can see the frustration in the video — and ultimately told us, “I don’t want to touch his name because it’s horrible for boxing, for [the] sport.”

Meantime, GGG is focusing on the fight ahead against Derevyanchenko — who’s 13-1 with 10 KOs.

As for GGG’s previous 2 fights with Canelo … the first was scored a draw and the rematch was a razor-thin judges victory for Canelo. However, a bunch of people think GGG won BOTH fights.