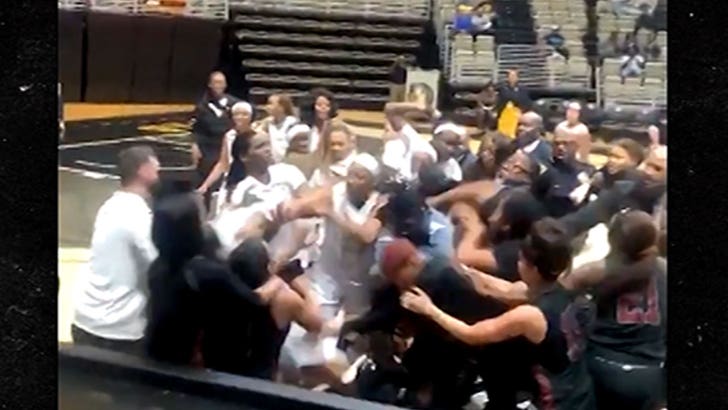 This is one of the most violent college basketball fights EVER — courtesy of the women of Alabama St. and Texas Southern.

ASU was being blown out 81-54 on Monday night in a super testy Southwestern Athletic Conference game in Montgomery … when a fight broke out and escalated QUICKLY.

The benches cleared and a BUNCH of players threw wild haymakers — some connected, some didn’t — but good lord, it was crazy.

Staffers and security rushed on to the court attempting to stop the brawl — but the players overpowered them at first.

At one point, the fight spilled on to the scorer’s table — and the combatants came thiiiis close to knocking the whole thing over.

Eventually, officials were able to separate the teams and sent everyone to the locker rooms. A spokesperson for the ASU police tells us there were NO arrests made.

Reps for Alabama State were pretty pissed over the whole incident on Tuesday … saying there WILL be repercussions for their players’ actions.

“I am extremely disappointed by the behavior of our women athletes at the end of their game against Texas Southern University,” ASU President Quinton T. Ross Jr. said in a statement.

“Alabama State University has a zero-tolerance policy for this type of behavior.”

Ross added the school is now launching a full-blown investigation into the fight … with suspensions and other disciplinary actions almost certainly on the way.

For their part, Texas Southern’s Vice President for Intercollegiate Athletics, Kevin Granger, said he was “deeply disappointed” in his team’s actions as well, and he promised a thorough review of it all.