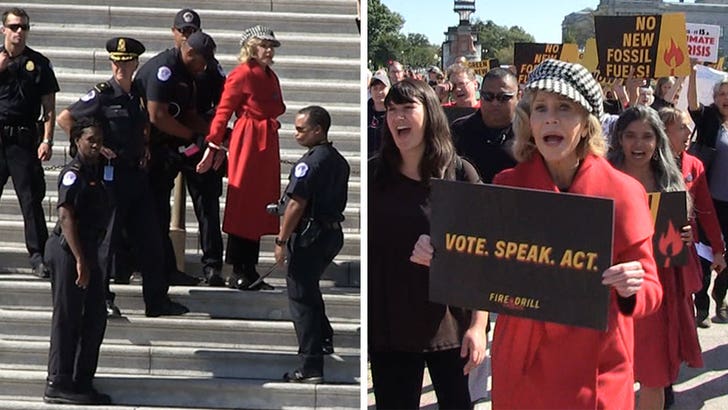 Jane Fonda is willing to go to jail over climate change — she just got busted outside the U.S. Capitol during a massive protest.

Jane was arrested Friday along with a number of other protesters on the steps on the east side of the Capitol building. In video from the demonstration, you see Jane being placed in handcuffs and escorted into a police van.

Jane was demonstrating with the group Oil Change International over the climate change crisis. The protest is part of Jane’s “Fire Drill Fridays” initiative — she’s vowed to protest outside the Capitol every Friday, rain or shine, and says she’s been inspired by Swedish teen activist Greta Thunberg and her weekly climate strikes across the globe.

Fonda says she recently moved to D.C. “to be closer to the epicenter of the fight for our climate.”

Capitol Police say all told … they busted 16 people, including Jane, for unlawfully demonstrating and they were charged for crowding, obstructing or incommoding (creating an inconvenience).

We reached out to Jane’s team for comment … so far, no word back.