Jane Fonda has been arrested for the FOURTH TIME in as many weeks as part of her crusade for climate change, but this time … she’ll also have to spend a night in the slammer.

Jane was arrested by U.S. Capitol Police Friday inside the Hart Senate Building. She, along with 45 others, were arrested after peacefully protesting and advocating lawmakers to finally act on climate change. The protest is part of Jane’s “Fire Drill Fridays” … an initiative inspired by Swedish teen activist Greta Thunberg. 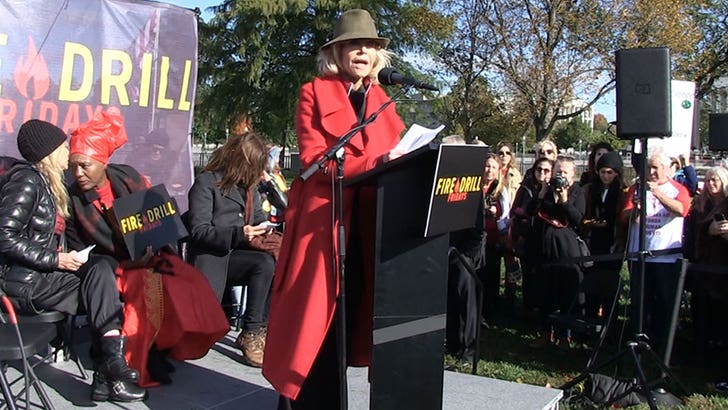 Jane proudly gave a thumbs up after she was hauled away … and actresses Catherine Keener and Rosanna Arquette were also arrested and charged with crowding, obstructing or incommoding.

Authorities have confirmed she’ll spend a night in jail for this arrest.

As we’ve reported … Jane’s been flanked by some of her friends during theses protests, including “Law & Order” legend Sam Waterston and Ted Danson, both of whom were also arrested.

The arrest clearly hasn’t put a damper on any of their moods … Jane looks pretty damn proud of her weekly arrests. Ted and Sam also sported grins and even made jokes.

Jane is demanding the passage of the Green New Deal and environmental justice. She vowed to take part in weekly demonstrations through early January … with other celebs, scientists and economists expected to join her. The peaceful protests have ended in numerous arrests for unlawfully demonstrating.