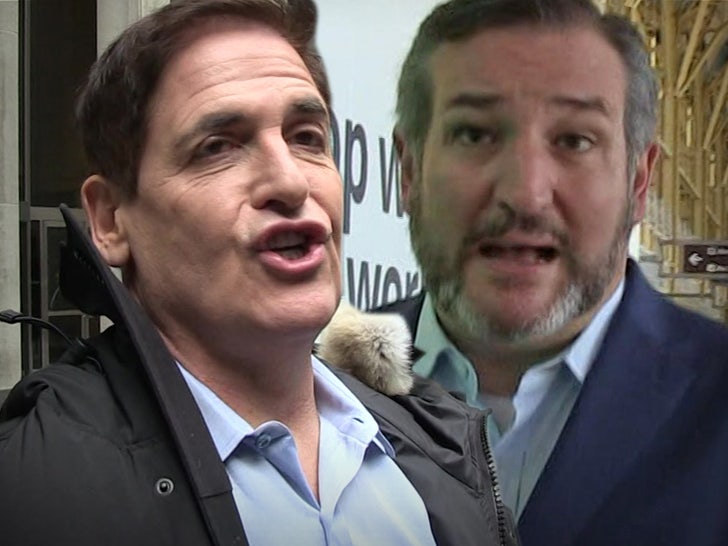 Well, this is nuts …

Mark Cuban and Sen. Ted Cruz are calling each other out about everything from the NBA’s handling of anthem protests to China … but the focus seems to be on who’s got the bigger balls.

It all started when a radio talk show host from Texas tweeted at the Dallas Mavericks owner that if any of his players kneel during the national anthem when the season resumes next week, he won’t support the team anymore.

Cuban responded — “Bye” … adding, “The National Anthem Police in this country are out of control.”

“If you want to complain, complain to your boss and ask why they don’t play the National Anthem every day before you start work.”

That’s when Ted Cruz chimed in … saying, “Really??!? NBA is telling everyone who stands for the flag, who honors our cops and our veterans, to ‘piss off’? In Texas, no less? Good luck with that.”

Cruz didn’t tag Cuban in his tweet — and Cuban called him out for it … saying, “Have some balls for once @tedcruz. Speak to me. It’s my tweet.”

Have some balls for once @tedcruz. Speak to me. It’s my tweet. https://t.co/QGza2qWoRR

That’s when Cruz replied with another BALLS shot!

“Speaking of balls, tell us what you think about China. I’ll wait.”

Of course, Cruz is referring to the NBA’s massive problems with China in 2019 — after Houston Rockets G.M. Daryl Morey tweeted out support for protesters in Hong Kong.

China essentially blackballed the NBA over the tweet — and the league is still reportedly scrambling to smooth out its relationship with the country.

So, Cruz decided that’s where he’d focus his attack on Cuban on Monday morning.

Still no answer from @mcuban

Can your players put that on their jerseys?

Can you condemn the CCP’s concentration camps w/ 1 million Uyghurs?

Can you say ANYTHING other than “Chairman Mao is beautiful & wise”? https://t.co/0XpLRaFSw2

“Let’s try simpler. Mark, tough guy, can you say ‘Free Hong Kong’? Can your players put that on their jerseys? Can you condemn the CCP’s concentration camps w/ 1 million Uyghurs? Can you say ANYTHING other than ‘Chairman Mao is beautiful & wise’?”

Nothing back from Cuban yet — but guess you could say the ball’s in his court????