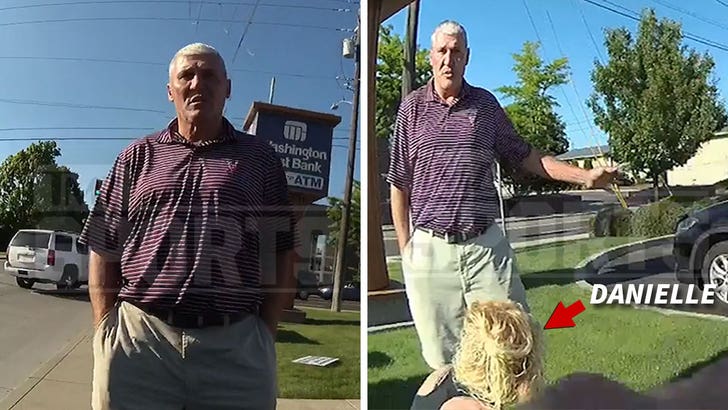 Mark Rypien‘s wife was on the ground gasping for air and choking after the former Super Bowl MVP struck her … and it’s all on new police video obtained by TMZ Sports.

Rypien and his wife got into an argument in their car on a busy street in Spokane, Washington on June 30 when Rypien says things got physical.

The 56-year-old — who won two championships with the Redskins in the late ’80s and early ’90s — claims his wife, Danielle Rypien, struck him in the head with a cell phone and poured water on him while he was driving. He also claims she covered his eyes while they were on the road and, when he got scared, he hit her.

In video previously obtained by TMZ Sports, you can see Danielle spill out of the car onto the ground and collapse onto a grassy area of a nearby bank parking lot. 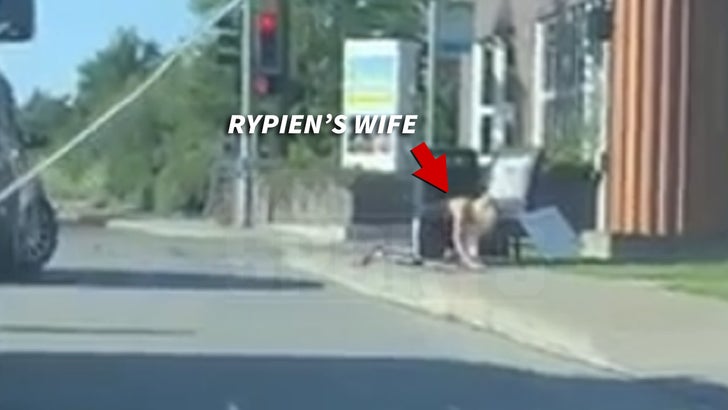 New police video shows what happened next … cops interrogated Rypien and his wife over the incident, and the former QB admitted to striking her.

“She was covering my face up when I was driving and I was scared and I just said, ‘Get away from me!'” Rypien said.

Cops say they also noticed the driver’s seat was wet — seemingly corroborating his story that Danielle had poured water on him.

When the cops asked why she was coughing and choking … Rypien added, “She just had the wind knocked out of her when I kind of threw her hand off me.”

“She was covering my face up and I was scared we were going to get into a wreck.”

Cops questioned both Rypien and his wife for the next few minutes over the incident … but Danielle appeared to refuse to tell officers what really went down — saying she was worried about what would happen to Mark if he went to jail.

“He raises money for cancer and it will hurt his reputation,” she told police.

She also told cops Rypien is “sick” — suffering from head trauma sustained during his days in the NFL.

Eventually, cops decided to arrest the ex-QB … telling Rypien that, since he admitted to hitting Danielle, “I do not have any choice but to place you under arrest for domestic violence.”

The video also shows cops acknowledging Rypien as a “pretty high-profile person” — and discussing how to handle the situation appropriately.

Rypien was eventually charged with misdemeanor domestic violence … and after fighting the case in court throughout the summer, he eventually got the charge dismissed on Aug. 30.

According to court docs, Rypien was able to get the charge dropped because he “acknowledged the event and is pursuing counseling.”

For his part, Rypien released a statement after the court’s ruling, saying, “In light of the dismissal of the misdemeanor assault charge against me, I want to express my appreciation to the citizen callers who reported this incident and to the officers involved for their efforts to protect Danielle on the day of this incident.”

“I also appreciate the professionalism of the officers, jail staff, court personnel and the prosecutor’s office in having treated me with respect and civility through a very difficult process.”

Rypien continued, “I want to be clear that I did not assault Danielle. We were having an argument and she put her hands on my face, blocking my view of the road while I was driving. I shoved her aside out of actual fear that I might drive our car into a pedestrian, or otherwise cause a collision that could harm others or one of us. This was done to protect innocent bystanders and both her and I — I had no intent to harm or offend [Danielle] in any way.”