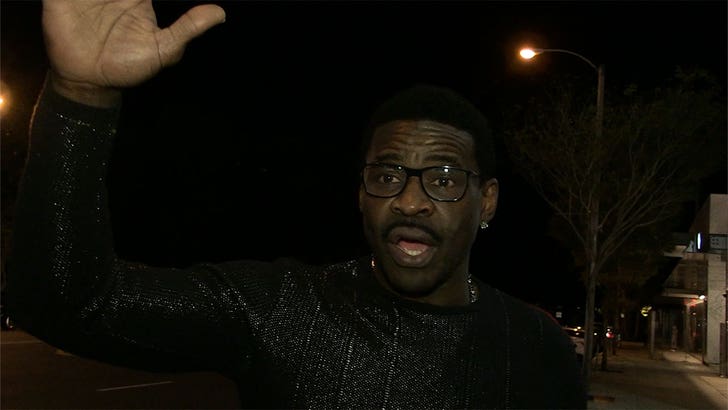 Michael Irvin says he’s still 100% on Team Antonio Brown — rooting for the embattled NFL star to get his career and life on track … and he ain’t apologizing for it!

The NFL Hall of Famer tells TMZ Sports he knows supporting AB isn’t the popular thing to do these days … but Mike doesn’t care what everyone else thinks.

Irvin says he spent his off-season giving motivational speeches — and talked to kids from “some of the hardest ghetto areas in Miami that Antonio Brown has come from.”

“And I want his story to end well so I can use it as inspiration and motivation for all those other black little kids in the ghettos and in the hells of America that are trying to get out.”

“We as a country get off on the problem because somehow, someway we take that as some kind of self-fulfilling thing that, ‘Hey, he made all this money playing football but at least I’m not making the stupid decisions that he’s making now.’ And I think that’s a sad way to look at it.”

Irvin adds, “I want his story to end well so I can use it to inspire others that are growing up in the same hellhole he grew up in and ain’t nothing wrong with that, man.”

“And I’m not gonna let anybody make me think there’s something wrong with that.”

Brown has a BUNCH of obstacles keeping him from playing again — starting with allegations he raped a woman in 2018. The NFL is currently investigating the situation and, according to multiple reports, he’s not expected to play in the NFL again this season.

He was also cut by the Raiders and the Patriots this season after all sorts of behavior — from illegally recording Jon Gruden to sending menacing text messages to a woman who accused him of sexual misconduct.