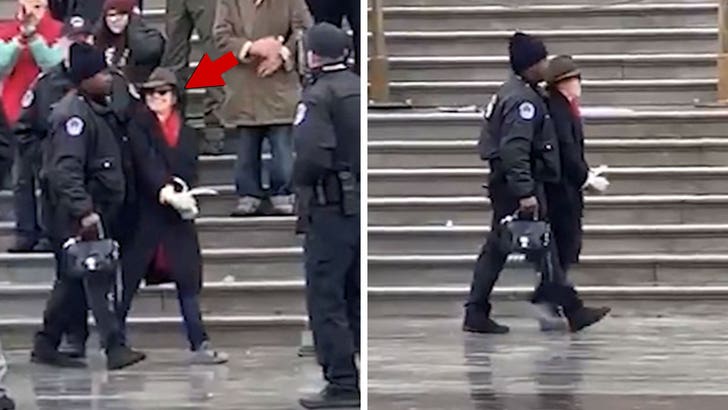 Jane Fonda‘s ever-growing celebrity crew of climate change activists has a new recruit — Sally Field … and she’s been arrested for the cause too.

The legendary actress was hauled away by Capitol police in D.C. Friday for protesting on the steps of the building … just like Fonda, several more members of Hollywood’s elite and many other concerned citizens the past 10 weeks of Jane’s “Fire Drill Friday” initiative.

This is a possibility that is actually happening, we need to get out of our comfort zones now! – @sally_field #firedrillfriday pic.twitter.com/1qNEfRfn12

Sally spoke to the crowd before her arrest, addressing this week’s theme of transitioning to a green future … and cited her Oscar-winning film, “Norma Rae,” for inspiration in getting it done.

It’s unclear how many people were arrested on a rainy Friday along with Field, but once again it seems like Fonda ducked trouble.

As we’ve reported … Jane’s been cautiously avoiding getting locked up after 4 previous arrests for protesting, because a 5th could lead to substantial jail time and her ‘FDF’ folks want her around for her leadership.

That hasn’t stopped other stars from joining the arrest club, though … Paul Sheer, Diane Lane, Piper Perabo, Amber Valletta, Sam Waterston, Ted Danson, Rosanna Arquette and Catherine Keener have all taken one for the team since the movement began.

We’re certain there will be more.