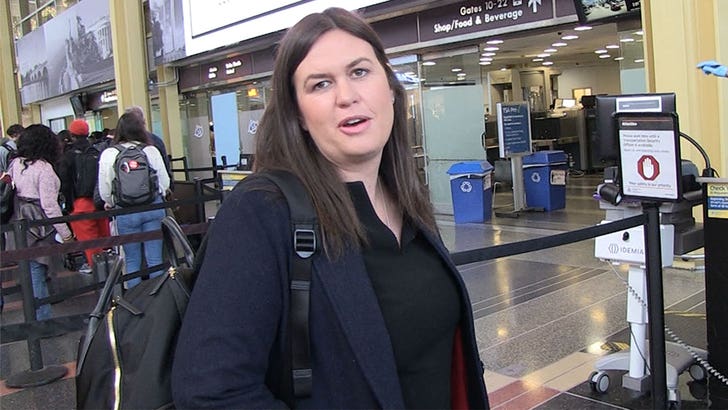 Sarah Huckabee Sanders doesn’t seem to regret leaving Trump‘s White House one iota — because she looks as calm and relaxed as we’ve seen her since stepping into DT’s orbit.

We got the former Press Secretary Saturday at the Reagan Airport in D.C. for a quick catch-up on her life since she resigned from her role back in the summer. While it feels like she did that ages ago, it’s only been a few short months — that’s how much has happened since.

Our camera guy jokingly asks how she’s enjoying her early “retirement,” and it sounds like SHS has no plans to hang it up completely just yet. Word around town is she’s ramping up for a gubernatorial run in Arkansas — where her dad was the gov for a long time.

We asked her about that, and Mrs. Sanders gave us a classic political non-answer answer. She didn’t say no though … so the door’s certainly there if she wants to open it in a few years.

Sarah also gives us an update on what she’s been up to lately, saying she’s been spending a lot of much-needed time with family — and has enjoyed every minute of it. Then, we get into impeachment … asking if she’s happy not to be part of that mess right now.

Her answer’s pretty telling — rather than jump at the opportunity to say she misses being in the line of fire, Sarah actually refrains here. That said, it’s clear she’s still in Trump’s corner.