5:21 PM PT — Jerry West — who made the deal to make Kobe a Laker — joined the show to discuss his feelings since the tragedy … and he says his memories go far beyond the court.

“To watch this incredible family grow and prosper, and now to see not one, but 2, but 3 families gone … saddest day of my life.”

“He always talked about this Mamba mentality. He didn’t have to create that, it was already there.”

4:20 PM PT — A powerfully emotional Shaq spoke more about the loss of his beloved teammate on TNT’s “Inside The NBA” on Tuesday … and it’s heartbreaking.

“I haven’t felt a pain that sharp in a while,” Shaq said on Kobe’s death.

“I haven’t felt a pain that sharp in a while.. it definitely changes me.”’@SHAQ on the loss of his brother, Kobe. pic.twitter.com/dM5i0DDgGK

O’Neal choked back tears while the show’s hosts intro’d the episode from the Staples Center court … with all the guys sharing their special memories with Bryant.

Shaq says he wishes he had invested more time in maintaining his friendship with Kobe … saying, “I wish I could say something to him again.”

That’s Shaquille O’Neal admitting he’s really struggling after the death of his “brother” Kobe Bryant — saying he hasn’t eaten or slept since finding out the horrible news.

“It just hurts,” Shaq said on his “The Big Podcast with Shaq” show … noting that he was already in bad shape because his sister, Ayesha, also passed away recently. 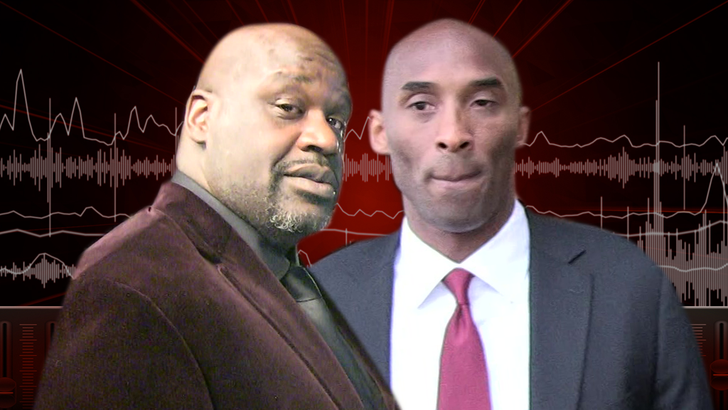 “I’m just getting over the death of my sister. You guys told me the other day when I came in, I looked like I needed some rest. And I haven’t been sleeping after Ayesha’s death.”

Shaq opened up and talked all about his relationship with Kobe — the good times and the bad times — saying despite the way it looked in public, it was all love behind-the-scenes.

“All the stuff that is documented between us .. this is what brothers do.”

Shaq says he’s glad the two became closer in recent years — but wishes they would have communicated more because he really loved and respected KB.

After the crash, Shaq says he reached out to Vanessa Bryant and offered his condolences. He’s heartbroken over the death of their daughter, Gianna.

“[Vanessa] lost her beautiful GiGi who was born on the same day as my 13-year-old daughter and that’s what really hurts.”

“We still are the best duo ever created, that’s never gonna change, but I wish we were 60 or 70 in the old folks home talking about it.”