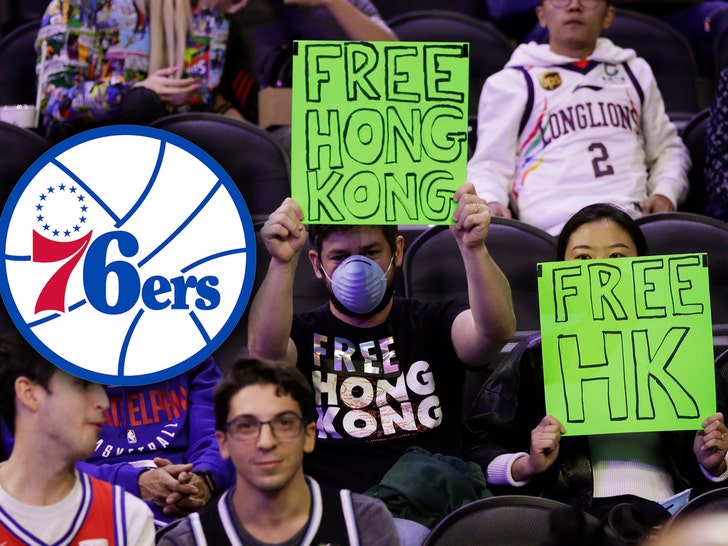 The 76ers are explaining why 2 fans with “Free Hong Kong” signs were kicked out of Tuesday’s game against a Chinese basketball team … saying the couple was a “disruption of the fan experience.”

A man and woman — holding signs and wearing pro-Hong Kong protester shirts — were escorted out of the Wells Fargo Center in Philly during the first half of the Sixers’ game against the Guangzhou Loong Lions.

The Sixers released a statement Wednesday breaking down the Wells Fargo Center staff’s decision to eject the fans … claiming they were warned several times to keep the peace.

“At last evening’s game, following multiple complaints from guests and verbal confrontations with others in attendance, two individuals were warned by Wells Fargo Center staff about their continuing disruption of the fan experience,” the team said in a statement.

“Ultimately, the decision was made by Wells Fargo Center personnel to remove the guests from the premises, which was accomplished without incident.”

Here are the controversial signs. I know, earth shattering right? Obvious why the NBA would have a problem with this. Thanks to @Christie_Ileto for sending me this photo: pic.twitter.com/Y1GydtGked

Wells Fargo Center officials say they warned the couple 3 separate times before kicking them out.

On the way out of the arena, one of the ejected fans reportedly told a local news outlet that security said, “no foul language, no politics.”

The incident comes on the heels of Rockets GM Daryl Morey‘s tweet supporting the protests in Hong Kong … which REALLY pissed China off.

Several NBA events have since been canceled in wake of the controversy … and China’s state broadcaster has taken Rockets games off the air.

FYI … the Rockets — Yao Ming‘s team throughout his NBA career — are ultra-popular in China.

Many fans were left wondering if this was another attempt by the NBA not to further rock the boat with China … but the 76ers say that ain’t the case.