One of the most popular faces on the Internet — you know him as the “Success Kid” meme — is shaking his famous little fist at Rep. Steve King for screwing up his brand.

Sam Griner is the little guy who became known as “Success Kid” nearly 10 years ago when people started attaching his determined little face to memes. Sam’s mother, Laney Griner, has fired off a cease and desist letter to Congressman King.

In the letter, Lainey accuses King of implying his re-election campaign is associated with “Success Kid.” She says King is using the Kid’s photo with the caption, “FUND OUR MEMES,” in large red letters on a crowdsourcing site. 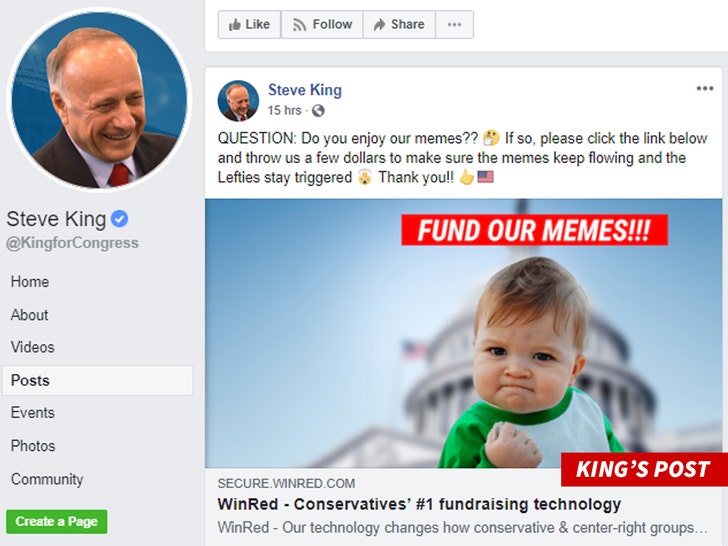 The Kid’s mom says she owns the copyright on Sam’s image and has licensed it over the years to huge companies like Coca-Cola, General Mills, Microsoft and Marriott. She has not, and it sounds like never will, struck any such deal with Rep. King.

Mama Success says of King, “You have a record of vitriolic criticism of individuals who belong to protected classes or disadvantaged groups, or who support legal rights that you condemn.”

The letter goes on, but you get the point — she’s not a fan of King or his politics.

She’s giving the Iowa Rep. until Wednesday morning to take down his Success Kid imagery, post a retraction and apology, and hand over an accounting of how much his campaign’s made off Success Kid. If he doesn’t meet the deadline, she strongly suggests a lawsuit is in the offing.

Griner also wants proof King will refund all donations to the public, and put a little something — or as she puts it, “reasonable compensation” — in Success Kid’s tight little fist.