Two Capitol Police Officers Suspended for Yucking It Up with Rioters 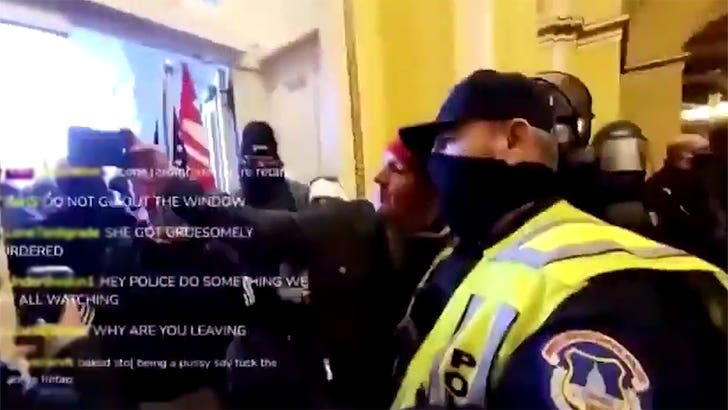 Two Capitol Police officers are being temporarily relieved of duty after they were caught getting super chummy with rioters who stormed the building.

Rep. Tim Ryan made the announcement Monday, saying at least 2 cops who were on duty last Wednesday have been suspended for actions documented during the siege. Of the 2 — who have yet to be identified — one was apparently wearing a MAGA hat and directing insurrectionists on Capitol grounds … the other took selfies with these folks.

One officer had taken selfies with some rioters; another put a #MAGA hat on and started directing rioters.

“The Capitol Police are looking at everybody…”

The latter appears to have been captured on video … a viral clip from that day has surfaced, and it shows a Capitol officer in a yellow vest and a black cap pausing to pose for a photo with one of the insurrectionists.

During a presser Monday, Rep. Ryan reportedly said Capitol Police are looking at everybody at this point … including men and women in their own ranks.

As we first reported, the FBI believes there are signs of an inside job, and is investigating whether Capitol PD officers or civilian employees in the Capitol aided the rioters in any way.

TMZ also broke the story … there could’ve been 4 times as many cops on hand Wednesday, and there probably should’ve been, considering the looming threats of violence ahead of the siege.

Capitol Police Chief Steven Sund resigned as a result of the backlash he and his department have faced for a poor show of force and for letting things get out of hand.