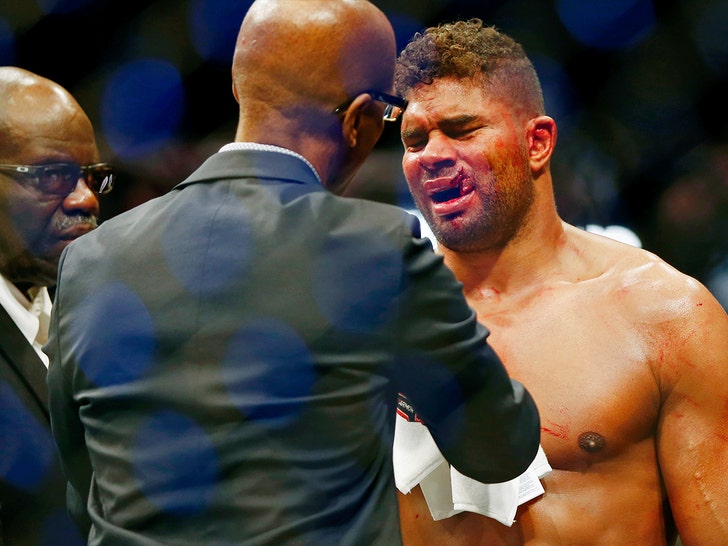 Alistair Overeem is cracking jokes about it Sunday, but he couldn’t even crack a smile after a sudden and bloody ending to his UFC fight, where his lip was nearly knocked clean off.

Overeem went down late in the 5th and final round of his UFC on ESPN 7 heavyweight match with Jairzinho Rozenstruik — he was winning handily, really … until then.

You gotta see the video of the shot Jairzinho uncorked right to Alistair’s upper lip — it’s almost like his face exploded.

You can see his lip completely fly off from that Jairzinho Rozenstruik just woke everyone up.

I feel bad for anyone that bet Overeem winning. #UFCDC pic.twitter.com/e7rDmTiMBb

He managed to get back up, and attempt to grin, but the referee called the fight with just a few seconds left in the round. The attempted grin didn’t work either, due to the horrific damage to Overeem’s face.

A few hours later, Overeem joked on Twitter about his lip not looking too sexy.

Getting stitched up. Lip not to sexy at the moment.. a little bit a fast stoppage if u ask me – but hope u guys enjoyed the fight 💪🏽💪🏽💪🏽💪🏽😌

If nothing else, the heavyweights made history — Jairzinho’s KO is the latest ever in a UFC heavyweight division fight.