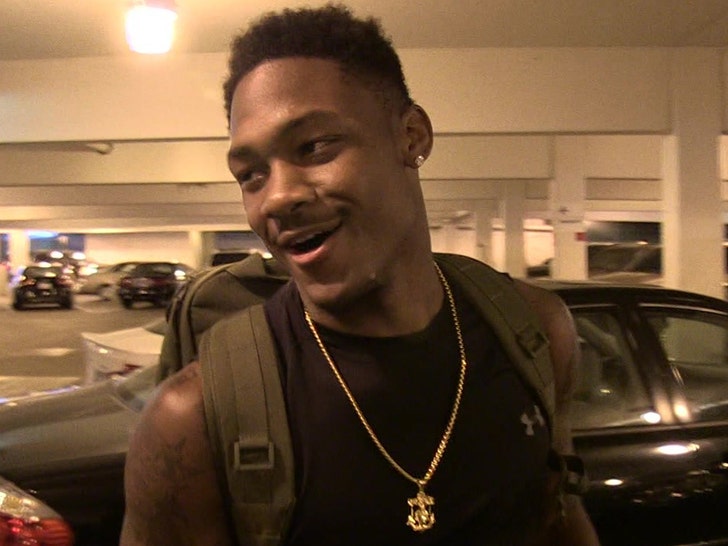 Stefon Diggs was one happy man on Sunday — he and his team beat the Lions at home … all while wearing a pair of cleats that the Clown Prince of Gotham would greatly approve of.

The Vikings wide receiver turned heads out at Ford Field, not just because he was playing like a stud — 7 catches and 142 yards by the end — but probably more for his footwear … a pair of custom “Joker” cleats,  with Joaquin Phoenix’s mug painted on the side.

There was also a recurring theme from the hit movie written in as well … “Put On a Happy Face.”

What makes these Adidas even cooler is the fact that Stefon had them colored in to match the Joker’s actual costume from the flick — when he finally transforms, that is.

Stefon Diggs with the custom @Starbucks cleats by @MACHE275 vs. Seattle on Friday. ☕️ pic.twitter.com/g5zF37AEvk

BTW, Stefon has a bit of a history of rockin’ pimped out cleats — literally wearing themes from Starbucks to-go cups to SpongeBob memes and almost everything in between. Props to his cleat guy … always up to date on the latest trends, and with a nice touch.

.@stefondiggs with the SpongeBob custom cleats. @Mache275 you killed these. 😂 pic.twitter.com/MvHaxWx3oH

Looks like they’re working out for Stefon and co. — the Vikings beat the Lions 42-30. Keep it going, bro!!!