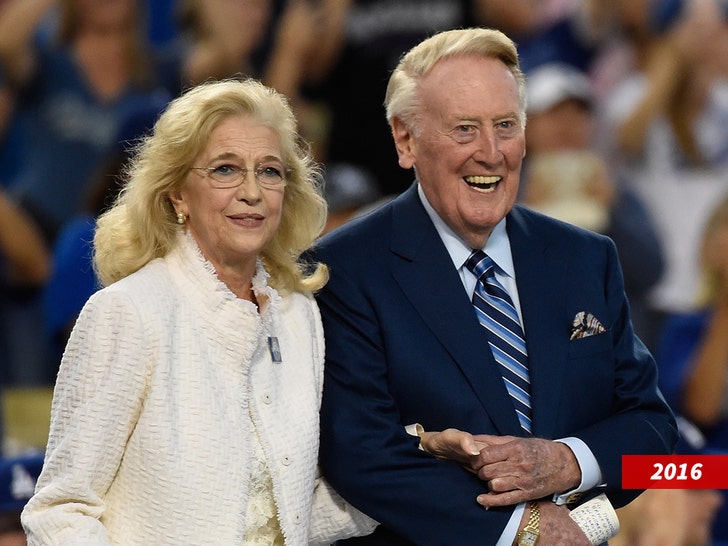 Vin Scully’s wife Sandi has passed away, the L.A. Dodgers announced Monday. She was 76.

Sandi had long battled ALS and died at at the Ronald Reagan UCLA Medical Center from complications related to her condition.

“We are saddened to learn of the passing of Sandi Scully, the loving wife of Vin and a dear member of the Dodger family.”

“Sandi was Vin’s biggest fan and was always there in loving support of him at Dodger Stadium until she began her battle with ALS. She was truly Vin’s and the Scully family’s rock, and she will be dearly missed.”

Vin and Sandi met in 1973 while she was working as an executive assistant for the owner of the L.A. Rams football team. Sandi has credited the team’s general counsel Ed Hookstratten for hooking them up.

“Unbeknownst to me, he told Vin about this young blonde he ought to check out,” Sandi told The NY Times … “And Vin told him, ‘I’m not in the business of checking out young blondes.'”

But one thing led to another and they began dating soon after.

Both Vin and Sandi were previously married — his first wife passed away in 1972. Sandi’s first marriage ended in divorce. But they raised their children together and later added a daughter of their own.

Sandi was known for her charitable work — she served as the chairwoman for Share Inc., which helps abused and developmentally disabled kids.

Vin adored Sandi — and famously recorded a rendition of “Wind Beneath My Wings” for her — which he played on the Dodger Stadium P.A. system back in 2016.