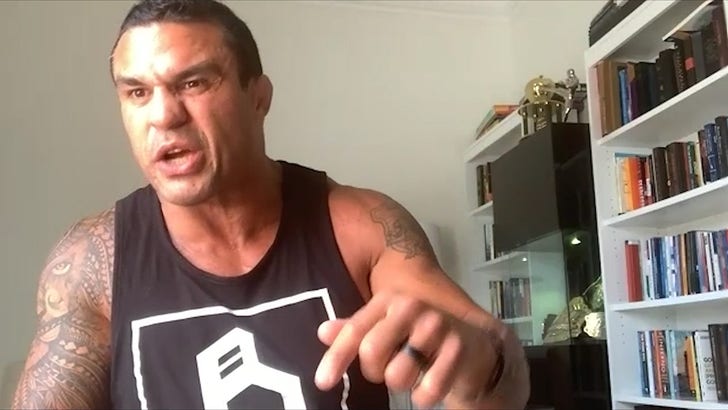 Vitor Belfort says he isn’t only fighting ONE Hall of Famer in Oscar De La Hoya … the combat sports star tells TMZ Sports he has also signed a deal to box Evander Holyfield later this year!!

We talked to the 44-year-old former UFC champ after Belfort was announced as 48-year-old De La Hoya’s opponent in his boxing comeback (ODLH hasn’t fought since losing to Manny Pacquiao in 2008).

Belfort — who has a tremendous amount of respect for Oscar’s career accomplishments — tells us his September 11 fight on Triller will literally be one of the hottest fights of all time.

“I believe this fight with me and Oscar, this is the biggest fight ever.”

So, why does Belfort believe it’ll be such a big deal? He says he and Oscar paved the way for some of today’s biggest stars.

“Oscar is legendary. Gold medals, one of the best pound-for-pound ever to live in the game. He revolutionary sport. If it wasn’t for Oscar, would not be [Floyd] Mayweather.“

Vitor continued … “If it wasn’t for Vitor Belfort, would not exist a Conor McGregor.”

If you think VB is just messing around … he isn’t. Vitor doubled down … saying his bout with De La Hoya will rival one of the most significant sporting events ever — The Rumble in the Jungle.

“This fight will sell like Muhammad Ali and George Foreman.”

Of course, Ali knocked out Big George in the 8th round of their historic 1974 boxing match.

And, get this, Vitor claims the bout with ODLH isn’t a one-off … ’cause he says he has a signed contract to box 58-year-old Evander Holyfield.

“I’m going to give you a little glimpse. After [De La Hoya in] September, December is me vs. Holyfield. Get ready for the crossover! We are taking over. Triller is bringing the fights that you dream!”